Did downstairs burn the toast again, or is that a symptom of a stroke?

Luke Natali, Advisor at Eastern AHSN, explains why we’re bringing together the stroke community in a forum to increase awareness, diagnosis and treatment.

The 29th October 2022 marked the 16th Anniversary of World Stroke Day. As the calendar flipped over to the 29th, in the UK alone this year over 85,000 people will have experienced a stroke.  That’s one person having a stroke every five minutes.  Stroke is the fourth leading cause of death in the UK, causing around 35,000 deaths annually1.  Fortunately, this number is going down.  Whilst improvements in emergency treatment and fewer strokes are partially responsible for this, it’s no doubt a greater awareness of the symptoms of stroke is making an impact thanks to campaigns like Act FAST.

Did downstairs burn the toast again?

When I worked in London, my regular morning work routine, and I will grant you that it’s not the most traditional of routines, often consisted of my manager and I checking “did downstairs burn the toast again?”  Either they had a malfunctioning toaster or they weren’t the best of cooks, but it was a near-daily occurrence that the scent of burning toast would drift in through our windows. We had both heard that smelling burning toast could be a symptom of a stroke or other brain issues, so we would regularly confirm that the burnt toast existed and there wasn’t something going wrong. Neither of us can trace back where we heard this information but it became our little ritual.

But does the “burnt toast” symptom exist or is it just a myth? Unfortunately for my old morning routine, it appears that there is very little evidence suggesting that smelling burnt toast or other forms of phantosmia (the medical term for unexplained scents) are a symptom of stroke2.  There is some evidence that suggest that patients post-stroke were more likely to experience phantom odours, which may explain how the myth came to be3. However, it’s also important to note that whilst the FAST symptoms below are the most common symptoms of stroke, there are less-common symptoms which can differ between men and women.  Women are more likely to experience the more non-traditional symptoms which can include hiccups and headaches4.

Thanks to awareness raising work like the Act FAST and Save #PreciousTime  campaigns, more and more people are aware of the most common symptoms of stroke:

Face – Has their face fallen on one side? Can they smile?

Arms – Can they raise both arms and keep them there?

Speech – Is their speech slurred?

Time – Time to call 999 if you see any single one of these signs. 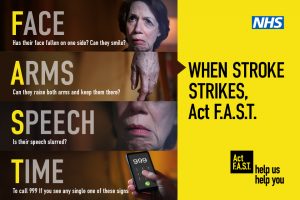 The purpose of these campaigns was to ensure individuals experiencing a stroke and those around them identify the situation faster to get access to treatment. This increases the chances of survival and can reduce the side effects of stroke. However, data from the lockdown period of the coronavirus (COVID-19) pandemic last year shows that admissions to hospital for stroke fell – a 12% drop between March and April 20205, – leading Public Health England and the Stroke Association to relaunch the Act FAST campaign, building on lessons learned from the previous campaign including a more joined up approach to involving clinicians.

Knowing the symptoms of a stroke is only part of the battle. There’s a lot of work going on in helping to minimise the risk of strokes for people, with helping people to reduce their blood pressure, quitting smoking, and getting better control of their cholesterol. One of the major risk factors for avoidable strokes is atrial fibrillation (AF), which accounts for 25% of strokes in all ages and 40% of strokes in patients over 806. That means that every 15 seconds someone in the world suffers an AF-related stroke that could have been avoided.

These aren’t simple problems to fix. If we are going to make the impact we all want to make, we need a coordinated effort with a strong network working across organisations, specialties and roles.

That is why Eastern AHSN is delighted to be hosting the Stroke Forum, which we have relaunched as both an online and in-person network to share best practice, provide peer support and share learning. We recently supported the East of England Stroke Network Conference on the 1st November to launch the Forum.

The event was focused around several areas of stroke care including AF detection, stroke career paths and hearing from the community. It was really inspiring to hear from stroke survivors, carers and clinicians about their experiences, and we were fortunate to be given a tour of the Mobile Stroke Unit which will be able to support even more rapid treatment for stroke patients.

To be kept up to date with the important work the Stroke Forum is undertaking, as well as hearing about the first annual face-to-face conference for the Forum, you can sign up to our mailing list.

Linking stroke activity in the region

Currently at Eastern AHSN we are involved in multiple projects looking at improving the detection of AF with the use of mobile ECG devices. Detection allows patients to be better protected from AF-related strokes through appropriate management such as anticoagulant therapy which prevents the stroke causing blood clots from forming. We are currently supporting each of our integrated care systems (ICSs) in the region through the Innovation for Inequalities Healthcare Programme (InHIP), aimed at improving AF detection in Core20 (the most deprived 20% of the national population as identified by the national Index of Multiple Deprivation) and PLUS communities and groups identified within NHS England’s Core20PLUS5 framework. These ICSs are providing people the ability to monitor their hearts (and detect any potential irregularities such as AF) at home using innovations like KardiaMobile and Zio Patches which are easy to use and more comfortable than traditional methods.

Whilst the annual reduction of strokes, greater awareness of symptoms, and better stroke survival rates is certainly something to celebrate, there is still plenty of ongoing work required to improve the care and treatment of those who experience a stroke.  All of us at Eastern AHSN are thrilled to be working alongside so many great teams, carers, leaders, and projects aimed at improving stroke care in the UK and that’s something we’re certainly happy to raise a toast to!

Luke Natali is an Advisor working in the delivery team at Eastern AHSN, working on a number of local and national projects as well as the Stroke Forum and InHIP.  Before joining Eastern AHSN in May 2022, Luke worked in the Clinical Research Network East of England for six years, supporting studies across a range of specialties including stroke and cardiovascular disease.  Luke has been working in healthcare since graduating in 2012.

Learn more about the Stroke Forum and network with your peers.